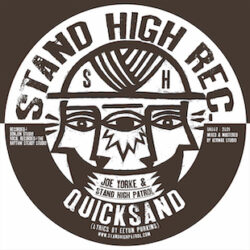 The Dubadub Musketeers haven’t let the current situation get in the way of their will to explore new horizons. Riddims are flying out of the Donjon Studio left, right & centre. Indeed, the crew is constantly on the lookout for fresh talent and musical avenues. It’s through this process that Stand High Patrol decided to get in contact with Joe Yorke a few months ago, after becoming familiar with his incredible voice. Straight away they built a strong connection, both sharing the same kind of musical views. This collaboration quickly came to fruition. Starting as a simple dubplate test recording “Quicksand” became a proper 7 inch vinyl release.

This new single has been exquisitely mixed at Kerwax Studio, the riddim was built by Pupajim and the Dub version on the B side comes courtesy of Stand High Patrol’s official operator, Mac Gyver. Joe delivers lyrics about human kind, its flaws, its “weaknesses” and emotions, with an extraordinary vocal performance. They were written by Eeyun Purkins, his long-time musical partner and accomplice. This pen / voice duo regularly comes together to create musical gems and connoisseurs will once again get to fully appreciate the extent of their talent on “Quicksand”.