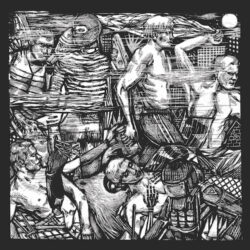 Stand High Records presents SH008: a brand spanking new 12” with two exclusive “discomix” cuts of Stand High Patrol’s last two singles “Same Justice” and “Working Man”. Both tracks have a special link, they were made around the same time period and are of similar nature. These tunes share that special groove and sweetness reminiscent of the Dubadub Musketeerz’s rocksteady productions.

On these two discomix versions, Pupajim’s vocal parts are followed by Merry’s trumpets, Mac Gyver then takes things into his own hands and dubs out the riddim! Time stretches and reveals the subtlety of the mix made at Kerwax’s studio. Stand High Patrol exploits the riddims without restraint by offering each member of the crew the space to express their skills and inspirations. These two stunning discomix versions are the result of a real collective effort. They were built for Djs, soundsystems and for all those willing to dive into an eight-minute sonic journey!