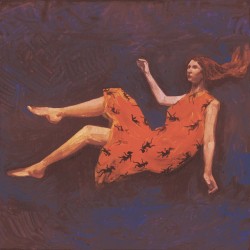 With the release of « Summer On Mars » the dubadub musketeerz and the Italian singer concretize several years of live collaboration. As a long standing project this new LP testifies to the strong links that unite them as much as their common desire to explore new horizons.

« Summer On Mars » relates to the sound of the nineties and is influenced by the distinctive rich musical heritage of Bristol. The album showcases Dub and Future Soul aesthetics. Its hybrid nature is built with early Techno instrumentals, G-Funk sounds, Hip-hop beats, soulful vocals and a large range of dub effects. A singular combination culminating in a captivating and poetic atmosphere. Over the nine tracks of the album Marina P reveals herself with lyrics relating to the condition of the individual, our mistakes and doubts, our place in the heart of society and the universe as a whole. Her verses invite us to rethink what it means to be human and to adopt a new perspective on the systems that rule our lives.

« Summer On Mars » takes us far from what we until now knew about Stand High Patrol & Marina P. Accomplices for ten years, they now offer us a unique album carried by a shared taste for experimentation